Better than the original in just about every way, VSS 2.0 gives you more options for placing your sounds yet is faster and easier to use. VirtualSoundStage 2.0 ($229 USD + VAT for the Pro Version, $129 USD + VAT Lite at parallax-audio.com) is a plug-in that lets users visually place sounds in their mix by seeing them on a “virtual soundstage”, as it were. Don’t you just love it when product names make sense? The Lite and Pro versions are identical, except that Pro offers more choices for microphone setups and rooms. When you buy the plug-in you get both 32-bit and 64-bit, with support for Windows (7 or later) and OS X (10.7 or later) in AU, VST and AAX flavors. The company also currently offers great upgrade paths from Lite to Pro as well as from VirtualSoundStage 1 (which we reviewed in 2013) to 2.0 Lite or 2.0 Pro. I liked the original, but 2.0 is so much better – not just in terms of sonic options, but also in terms of speed, workflow and ease of use!

VSS 1.0 was already CPU efficient and quick for placing each individual sound, but there were many ways that I hoped it would be improved in the future, something the developer was already alluding to at the time. It’s no exaggeration to say that VSS 2.0 fully realizes that potential – it actually goes far beyond it. Let’s compare and contrast, point by point.

In VSS 1, the interface showed you a single speaker for the sound/track you were currently placing, regardless of how many instances of the plug-in you were running in your mix. In VSS 2.0, every time you add the plug-in to your sound/track, it shows up in the same soundstage – so you can visualize the whole session at once, moving sound in relation to each other. In VSS 2.0 each sound is visualized using three points (the center and two edges) instead of a single speaker.

In VSS 1, most things were fixed: microphone setup (Decca Tree) and microphone placement, the room, sound width, height, etc. In VSS 2.0 you have more options and control over far more parameters. For instance, in VSS 2.0 Lite, you have four microphone setups (Decca Tree, XY 90 Degrees, ABS 90 Degrees and EBS) and one room (Concert Hall A) or the absence of any room at all. In VSS 2.0 Pro adds ten more microphones and eight more rooms, for a total of fourteen microphone setups and nine rooms, or the absence of any room at all. Not only that but almost every parameter is now controllable. 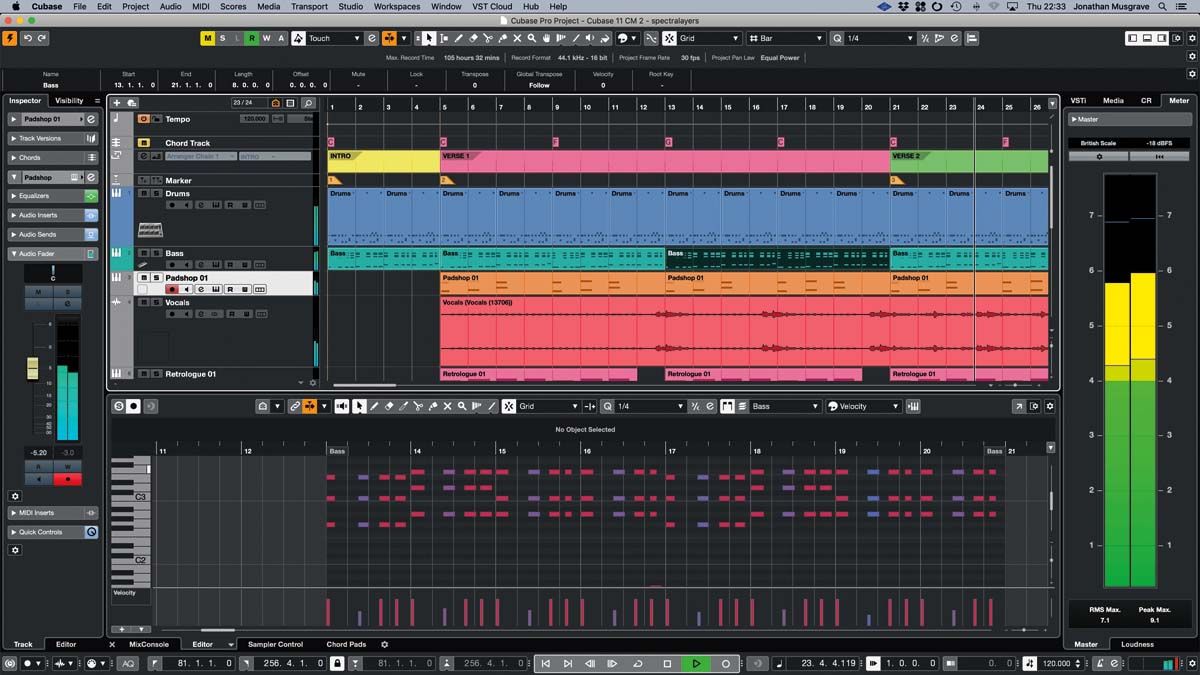 VSS 1 and VSS 2.0 both offer a similar air absorption control for each sound source (damping or boosting high frequencies based on distance, etc.), while VSS 2.0 adds a directivity control. The directivity control changes how much the sound is focused in the pointed direction, versus spread in all directions. So, if you have a recording of a human voice (which changes dramatically depending on the direction the speaker/singer is facing) you could get a realistic result by using high directionality. By contrast certain other sounds (like a bell) would realistically spread in many directions more evenly, so you would want to use a low directionality setting.

VSS1 gave you the ability to manually compensate for sounds that were recorded off-center using a separate gain and delay offset menu, accessible by pushing the input offset button – along with the “mono-maker” option to only use either the left or right channel. VSS 2.0 ditches the mono-maker option, but integrates the manual controls into the main menu and adds the (very useful) auto-detect button, that lets the plug-in analyze the audio playback on the track for a few seconds to estimate the input offset. This makes it easy for people to use libraries recorded off-center without having to manually figure out the offset. There’s also a pre-listen option to hear the sound straight after input-offset processing, making it easier to fine-tune if you want to.

VSS 1 had a set seating chart that you could use as a reference, while VSS 2.0 offers six different ones for band, orchestra and choral applications. In VSS 1 all your controls only affected one sound, while in VSS 2.0 you have sound specific controls (in the center pane) along with global controls on the right. In VSS 2.0 you can actually change the microphone setup used (or the balance between dry signal and early reflections, etc.) for all plug-in instances at once using this pane on the right. You can also globally bypass or enable all instances of the plug-in to A-B the unprocessed sound.

Continuing in this vein, you can label each sound you use (for instance “Violin 1”) and choose a color for it to make it easier to find and place in the main GUI in the center. You can zoom in and out of the soundstage display by holding down the control button using your mouse wheel on Windows computers (with equivalents offered in OS X and with other devices). Individual sounds can be dragged up and down the list on the left as you see fit, and you can access the controls for any sound by selecting it from the list – regardless of which VSS 2.0 instance you are using. It’s great for organization and saves so much time compared to VSS 1 that it’s difficult to measure.

VSS 2.0’s sound is shaped by three primary areas: the microphone setup and settings, the room choice and the individual sound settings. The room choice changes the early reflections that are calculated, much like switching reverb presets. VSS 2.0 does not calculate a reverb tail, so you’ll usually want to add additional reverb using your favorite reverb plug-in or hardware unit. In my testing, I used Liquidsonics Reverberate 2 for this purpose. However, you can also choose “free field” and skip the early reflections entirely and still be able to hear a big difference any time you change the microphone setup (especially between Decca Tree and all others). The additional rooms and microphone setups in Pro are a useful addition compared to Lite. All of my favorite rooms were in Pro and the variety of mic setups was great, with AB 200 degree being a favorite out of the new ones. That said, the four mic setups in Lite are already enough for many users, already covering Decca, EBS, AB 90 degree and XY 90 degree – so there are ample options for the budget conscious user.

VSS 2.0 hits the mark in so many respects that there are very few areas where I could offer constructive criticism, but one of them is important if you are using a low screen resolution. In my DAW of choice (Cockos Reaper) VSS 1 works well as long as the interface is given at least roughly 1007×700 pixels to display. By contrast, VSS 2.0 needed at least 1208×748 pixels to display in small mode (which still requires using a scrollbar to access some controls) or at least 1357×850 to display at medium size (the smallest size that doesn’t require scrolling). So users with low resolution or legacy displays (1280×720, 1152×768, 1024×768, etc.) will struggle unless their DAW supports scrolling. Hopefully, most users are running at a higher resolution by now but since it’s literally the only reason I can think of why someone wouldn’t want to upgrade from VSS 1 to VSS 2.0, it’s important to mention.

VSS 2.0 is designed for stereo-mixing. It outputs in stereo, so if you’re looking to place your sound in 5.1, 7.1, Atmos, etc. VSS 2.0 won’t help you. I mostly mix in music in stereo, so that’s not a big issue for me but for some users it might be.

My other critiques are more in the nitpicking realm. It’s great having the flexibility to point sounds in any direction I choose, but given how often I want sounds to point at the microphones it would be great if there were a checkbox to “auto-point at microphones” so that I didn’t have to keep double-clicking on the sound after I moved it each time. As I said, this is a nitpick (double-clicking only takes an extra moment, after all) but I’d still put it on my wish list. Another great addition would be if there was any way to make it possible to resize the panes in the interface (so I could display longer names when needed, etc.). I don’t know how easy or difficult the programming involved in that is, and it’s not essential – it would just be a nice extra if parallax-audio ever does an update.

Finally (and this falls more on the users than the developer) it would be great if people took the developer up on expanding the preset library. Yes, it is really easy to make my own presets but … a guy can want to be lazy, right? 😀 Seriously, though – the developer puts their support e-mail on the website and invites you to suggest any library you’d like to see presets for, so go for it.

As mentioned, VSS 2.0 is designed for mixing in stereo instead of surround sound formats. It’s the most inexpensive and CPU efficient tool I’ve found for that purpose. However, there are two notable competitors at higher price points (in some cases, much, much higher price points) that offer alternative functionality worth discussing.

Vienna MIR Pro (c. $750 USD) and Vienna MIR Pro 24 (c. $345 USD) are alternatives to VSS 2.0 that work especially well with VSL libraries, but are also useful in other contexts where users don’t want to use any other additional reverb. While VSS 2.0 can calculate (or omit) algorithmic early reflections, it doesn’t calculate a reverb tail. MIR, on the other hand, uses convolution impulses from a variety of real world spaces – which uses a lot more CPU but also means you don’t need any additional reverb to place your sounds in the mix. Note that if you like using a Decca Tree microphone setup, MIR won’t cater to you the way that VSS 2.0 (or even VSS 1) does. MIR is not fully designed for surround sound the way that the next competitor is, but it does offer more functionality in this area than VSS 2.0 alone.

All three products offer trials of various sorts, so you can try them out for yourself. My suggestion would be demo them in ascending order of price.

Is It Right for You?

If you have VirtualSoundStage 1 and run at any modern screen resolution, then upgrade to VirtualSoundStage 2.0 now – it’s better in practically every way. If you’ve never used sound placement software, VirtualSoundStage 2.0 is quick, easy-to-use, competitively priced and CPU-efficient. It makes it much easier for people that aren’t experienced mixing engineers to place their sounds in a virtual soundstage and is great for people that prefer to be able to see their sounds instead of look at a collection of pan knobs. If you’re mixing in stereo, VSS 2.0 is much less expensive and uses less CPU than competing products making it the first one I’d audition. It works great with your reverb tail plug-in (or hardware unit of choice) and fits in well into many different workflows. On the other hand, if you don’t want to use any other reverb plug-ins (or you mainly use VSL products), I’d give the Vienna MIR series a look, and if you mainly want to work in surround sound, consider IRCAM Spat Revolution – just be prepared to pay more for their respective functionalities.